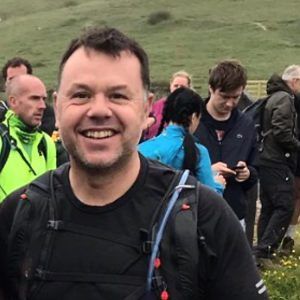 Mark Phillips, a mental health support worker for Hafal, is taking on the Yorkshire Three Peaks challenge on the 16th of April 2022 to raise money for Sandy Bear Children’s Bereavement Charity. Supporting him on the day will be his girlfriend and daughter.

The Yorkshire Three Peaks Challenge involves taking on the peaks of Pen-Y-Ghent, Whernside and Ingleborough, in the Pennine Range, in less than 12 hours. The route is around 24 miles long (38.6km) and includes an ascent of 1585m (5200ft).

Mark has previously taken on other physical challenges with the aim to raise money for charities including Pembrokeshire Guide Dogs and Diabetes UK.

Karen, Clinical Lead at Sandy Bear Children’s Bereavement Charity, says ‘We are really lucky to receive such support from our local community. We are really grateful of the support from Mark and wish him the best of luck during this challenge.’

Mark Phillips says, ‘I really enjoy challenging myself and like to keep fit by going walking. I was made aware of Sandy Bear Children’s Bereavement Charity from friends and thought why not take on the challenge and raise money for charity whilst I do it!’